There are those grand moments so significant and life changing you know in an instant things will never be the same. Your brain captures every detail like a high tech camera crew so the moment can be replayed in slow motion, in bits and pieces or from start to end. The smells, the sounds, the characters, the emotions are there whenever you might want them. I remember my grand moment. It was the day the boys arrived at Shamrock Farms.

My dad is a big fan of surprises. Good surprises. Unimaginable surprises. Like, big bow in the driveway kind of surprises. And, he is usually pretty good at making sure they happen just like he planned. This surprise wasn’t that easy, but the impact was monumental.

For some time he had been mulling over the idea that he wanted to grant my wish of having a camel. His idea was to just get one, have it delivered and never mention it. The surprise would come when I unsuspectedly drove up the long gravel drive to our ranch. I would look toward the barn and be shocked. Fantastic idea, but he ran into a roadblock when he couldn’t find a camel for sale. Not a surprising roadblock since we live in Kansas–not exactly a hotbed of camel ranches.

So he let me in on his plan. I did some research and we took off to plan our own surprise. We got up early that morning, though I hadn’t slept much anyway. We told Granny and Grampy some story about going to Abilene. They did not suspect a thing.

Arriving at the exotic animal farm in Nickerson, KS was like arriving at Disney Land. We were early for our appointment with the owner, so we gladly spent time walking from pen to pen interacting with the animals. There were all kinds of exotic animals, but I was there for the camels. As far as the eye could see, there were pens of camels. My heart was beating so fast as our big plan started to feel like it might really happen.

The owner introduced us to the three-year-old camel he wanted to sell. His name was Simon. He was light colored, friendly and had a habit of smoking cigarettes. Seriously. I really had no idea what I was looking for in a camel. I think my only requirement was that he was breathing. But, we looked at him like we knew what we were doing. We asked questions. We looked at his feet and legs and his hump, like we were buying a car.

I had to wear a poker face while dad negotiated with the owner, because in my heart Simon was already sold. As we walked back to his office to make payments, he took us by another pen of camels. He told us camels are social beings and we really should have two if we were going to have any. Still trying to act like we knew anything about camels, we took a look.

He introduced us to Sam. A nine-month-old dark baby with eyes that could instantly melt your heart. He looked shaggy, like no one had ever brushed him. He was born with a bad leg and could never be used for working. My heart about burst when dad said we could take them both. 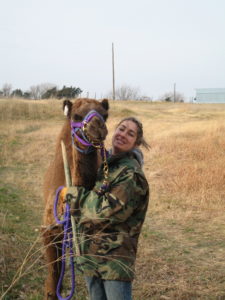 The owner agreed to deliver them and I begged him to bring them as soon as he could. He said, “how about sometime this week?”  And I said, “how about tomorrow?” I was sure I could not conjure up enough patience for his schedule and I think he got the hint I was ready for these two camels to be home. My only regret was not asking him to bring them first thing in the morning. The wait was excruciating.

I remember feeding the cattle that September day and preparing for the annual cattle herd vet visit. The minutes ticked away soooo slowly! Dad and the vet talked about weather, cattle prices and other things that had nothing to do with camels. I could not focus on anything. I hardly spoke for fear of giving away the big surprise. And every little sound seemed like it could be a trailer pulling into the driveway, but it wasn’t.

The day slowly faded away and my patience grew short as I started to believe it would not be the day of the grand surprise. And then, in an instant, it was time. A trailer was pulling into the drive and it could only mean one thing. This was it and it was really happening. 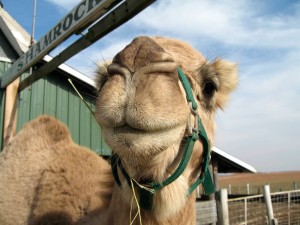 Before the trailer was halfway up the drive I ran to the house asking Granny, Grampy and my aunt to come to the barn. They resisted and grumbled about how dinner was almost ready. I somehow convinced them to come outside.

They stopped in their tracks at the sight of the huge trailer backing up to the barn and bombarded me with questions. Although I wanted to shout out that we finally had camels, I kept the suspense with nothing but a smile on my face. After all, I had learned from the king of surprises.

Even today, 10 years later, I still smile when I think about Simon—whose name was immediately changed to Siwa—walking off that trailer. No hesitation or wonder. He strode off the trailer and looked around as if to say “what took you so long to bring me home?” He was instantly comfortable at Shamrock Farms. It was as if in Camel World, he knew he had just hit the jackpot. 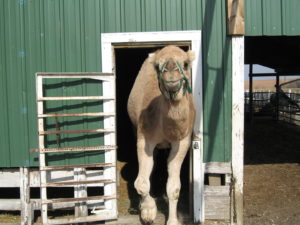 The little camel—named Sarid upon arrival—was a little different. He was apprehensive, maybe even downright scared. We led him into the safety of the barn. He huddled in the corner and chewed on the gate. He was at Shamrock Farms about 10 minutes before I started brushing him so he could look like the handsome camel he was meant to be.

The barnyard was a flurry of excitement as we explained our trip to Abilene was a ruse. Before we could answer the questions about logistics and what they eat and their new names, several car loads of family members arrived for dinner and we got to surprise all of them with our new treasures.

Word traveled quickly and the weekend was filled with visitors who had heard the grand news. Finally, there were camels at Shamrock Farms. 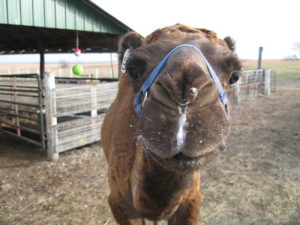 One thought on “The Day the Boys Arrived at Shamrock Farms”